For the 'Soaking in the Culture' Ones 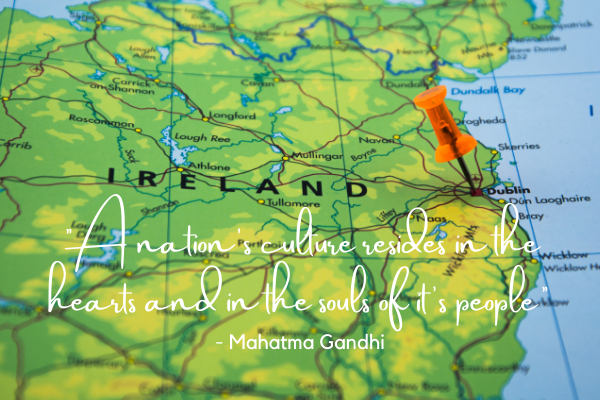 Monaghan is a steeped in plenty of cultural hubs, with attractions such as Monaghan County Museum, The Garage Theatre and The Patrick Kavanagh Centre, to name but a few, which attract large volumes of visitors each year. Other cultural activities and sites of interest can also be visited. Finding the right Monaghan day out for you is easy-peasy – Simply explore your options below to plan your next cultural experience:

Monaghan County Museum has been serving the people of Monaghan for over 40 years. During which, it has diversified to match the needs of a changing community. This award-winning museum has a professional commitment to excellence in caring for and displaying its collection, as well as making that collection as accessible as possible both intellectually and physically.

Spend some time visiting some and sampling the bustling markets around Co. Monaghan:

Experience Monaghan’s self-guided heritage trail, leading you to no less than 10 cultural hot-spots, starting at Rossmore Monument and ending at the Old Railway Station.

The Lace Gallery, where Carrickmacross Lace is designed and crafted by award winning lacemaker Mary O’Neill.

Carrickmacross Lace originated in the early 1820’s with its style inspired by some examples of appliqué lace collected by Mrs Grey Porter of Donaghmoyne, near Carrickmacross in County Monaghan, while on her honeymoon in Italy in 1816.

Situated in Ireland's Ancient East, and at the heart of the historical barony of Farney, Carrickmacross Workhouse, one of the few remaining Irish Workhouses to be lovingly and carefully restored, showcases our heritage and the best that South Monaghan has to offer.

The Patrick Kavanagh Museum is located in Inniskeen in Co. Monaghan and was set up to commemorate the infamous poet Patrick Kavanagh. The facility itself was opened by Mary Robinson in 1994 and showcases exhibitions of Kavanagh's life story along with as well as the history of the surrounding area.

Brehon Brewhouse was founded by local dairy farmer Seamus McMahon, who takes inspiration from the wealth of literary and familial history that surrounds the area. Brehon Brewhouse’s brewer has created a range of well balanced and flavoursome ales that reflect the changing face of the beer market in Ireland. See where it all began with a visit to the milking parlour, followed by a trip to the brewery to see the master brewer and his apprentice at work. Round off this experience with a tasting of Brehon Brewhouse’s range in the McMahon family home. Tours are by appointment only.

The Garage Theatre provides a venue for touring theatrical groups that produce a high eminence of professional theatre. In addition to this the Garage also provides a space for local amateur groups (both Junior & Senior alike) making it a valuable resource for the local community.

Monaghan Market House’s aim is to stimulate the public’s interest, access and participation in the arts and engage audiences through appropriate delivery of Arts Programming.

Iontas’ aim is to provide, promote and foster the vision and space for initiative and innovation in personal and community development. This happens through all kinds of educational, creative and artistic endeavours through the variety of live performances and exhibitions available to attend.

Edergole or ‘Eadar Gabhal’ – a place between two forks (of a stream) is located south-west of Rockcorry on an elevated ridge, from which many ringforts atop surrounding drumlins can be viewed. Edergole Court Tomb, known locally as the Giant’s Grave is partly incorporated into a roadside fence. Almost 8 metres long, two jambs are surmounted by a lintel to provide access to the gallery. In the past this was an important centre for the Neolithic community acting as both a communal burial tomb and ritual site.

Clones Town (Cluain Eois) began as a monastic settlement c. 500 when St Tiernach founded his monastery there and this was the most important site in Monaghan for centuries afterwards. The tower, cross and church all belong to this period of Clones’ history.

Clones Motte and Bailey was constructed in 1212AD. The site comprises a conical mound with a series of terraces and is surrounded by a ditch at the base. These mounds were used because they afforded security from enemies, or wild animals and also because lowlands were subject to flooding. It is likely that a wooden tower once stood on top of the mound.

A larger-than-life sculpture of Big Tom McBride (1.5 times the size of the man himself) in a sitting pose reflecting his status as a ‘man of the people’ can be viewed in Castleblayney, Muckno Street, making a fitting tribute and a wonderful testament to the popularity of the frontman of the Irish showband Big Tom and The Mainliners.

The remains of St Daig’s monastery at Inniskeen are to be found in the church cemetery. The first reference to the existence of a monastery here is 685 and the death of the last recorded monk took place in 1085. St Daig studied under St Ciaran at Clonmacnois and St Colmcille is said to have been present at the foundation and blessed the monastery.

There remains the stump of a Round Tower which is a National Monument. It is 12-metres high and constructed of hammered whinstone with a raised doorway 14 feet above the ground.

The cathedral stands high on the town-land of Latlurcan, visible on all main roads approaching Monaghan town. Monaghan became a cathedral town in the mid 1800's thanks to the careful planning of Bishop Charles MacNally. The 8-acre site for the cathedral and bishop's house was purchased in 1861 with most of the limestone used in the building coming from a quarry very near the cathedral site at Old Cross Square.

The old church in the parish of Errigal Truagh, located in the townland of Mullanacross, Trough Barony, County Monaghan, belongs to a medieval site which was founded by St. Mo Lua in the 6th century. The church was already in ruins in 1622, just the two gables are still standing and the foundations of the side walls can still be traced.

Constructed of tin, St. Peter’s Tin Church is one of a kind in Co. Monaghan and unique on the island of Ireland for its quirky design and carefully considered features. St. Peter’s Tin Church is part of Ireland’s irreplaceable built heritage literally built on a rock, in a beautiful woodland setting amongst the ferns and ivy. As you approach from either side and round a bend in the road, this highly unusual Tin Church stands dramatically on a high rock overlooking a small, fast flowing river. It is a very rare example of a nineteenth-century corrugated-iron-clad church. It displays a wealth of amazing architectural details and makes a picturesque artistic contribution to its wooded valley on the outskirts of Laragh, a former mill village in South Co. Monaghan.

Why Book With Us?

Book Your Stay
Why Book With Us?